Dental Charts to Help You Understand the Tooth Numbering System 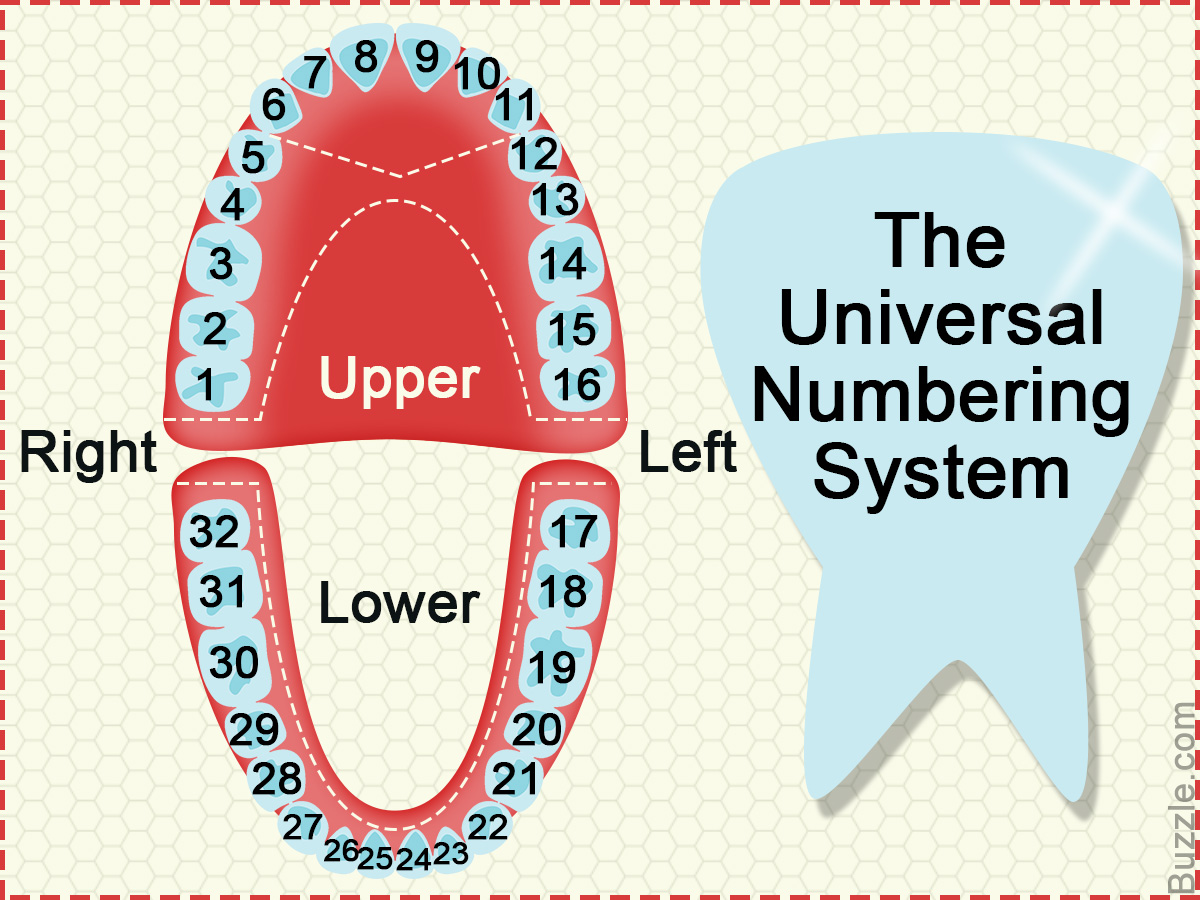 The Universal Numbering System, which is widely used in the United States, was adopted by the American Dental Association in 1968.

Both the maxillary (upper jaw) and mandibular (lower jaw) arches contain similar types of teeth. There are four types of teeth that are present in the upper as well as lower jaw. These are called incisors, canines, premolars, and molars.

Classification of Permanent and Deciduous Teeth

The front four teeth in the upper and lower jaw are called incisors. The two teeth in the center are called central incisors, whereas the teeth on either side of the central incisors are called lateral incisors. These help us in cutting or biting food. Canines, which are also called cuspids, are slightly pointed. These help in tearing food particles while chewing. Separated by the incisors, there are two canines each, in the upper and lower jaw. Four premolars are present in each dental arch. Two premolars are located behind each canine in both arches. These help us crush food while chewing. Molars are classified into first, second, and third molars. Normally, six molars are present in each dental arch. These are located behind the second premolar on both sides of each arch. These are bigger than the premolars, and help us grind food into smaller particles. The third molars are also referred to as wisdom teeth; not every person may develop wisdom teeth.

Deciduous teeth are the first set of 20 teeth that appear in childhood. It must be noted that children don’t have premolars. Only adults have premolars, which are a part of permanent teeth only.

All the adult teeth are numbered in this manner, even if the third molars or wisdom teeth have not yet erupted, or some of the teeth have been removed due to dental problems.

Mainly used by some orthodontists, pedodontists, and oral surgeons, the Palmer notation method is the method followed by dentists in the United Kingdom. It was earlier called the ‘Zsigmondy system’, after Adolf Zsigmondy, a dentist from Hungary who came up with this concept of tooth numbering system in 1861. The teeth were divided into four quadrants, and the adult teeth in each quadrant were numbered 1 to 8, whereas the 20 primary or milk teeth were depicted with a quadrant grid using Roman numerals I, II, III, IV, and V to number the teeth from the midline. Corydon Palmer, a dentist from Ohio made changes to this dental notation, replacing the Roman numerals with letters in case of primary teeth. This notation involves the use of a symbol ( ┘└ ┐┌) for each quadrant, with the number or letter assigned to the tooth position from the midline that divides the teeth into four quadrants.

While adult teeth in each quadrant are numbered 1 to 8, the five deciduous (milk) teeth in each quadrant are indicated by A to E. Thus, number or letter for a particular type of tooth in the upper and lower jaw would be the same, but the symbol for the quadrant would be different. Right and left quadrants of the upper jaw would be denoted by ┘and└, respectively. On the other hand, the right and left quadrants of the lower jaw would be denoted by ┐and┌, respectively. Though the Palmer method was suggested for the purpose of dental notation earlier in the United States, the American Dental Association adopted the Universal numbering system, as it was easier to type due to the absence of symbols.