Know How You Should Use Fire Extinguishers in Case of Emergencies

Fire extinguishers are installed in workplaces, shopping outlets, and houses to douse a fire in case of emergency. They serve as the most useful fire safety units at work zones and one must always know how to use them during a sudden fire breakout. A fire extinguishing cylinder contains a discharging agent which is pressure filled and let off on a fire for the purpose of extinguishing it.

Whether a fire extinguisher is being installed in a workplace or a house, it’s advisable to learn about the technical aspects of the device and install it in the correct place. A regular inspection of these units is carried out at work zones with large-scale manpower. Fire extinguishing training is also provided to people, so that they can use the device effectively in emergency situations.

Procedure to Use
The correct procedure for using the various types of extinguishers differs from each other. The instructions are clearly explained on the cylinder and you can follow the same. However, there are certain precautions that you should always know before opening the nozzle. Always keep the mouth directed towards the fire and keep yourself at a safe distance from the fire, as well as from the mouth of the cylinder.

During a fire outbreak, always set the fire alarm system on, so that the rescue team arrives immediately at your doorstep before any major damage has been caused. 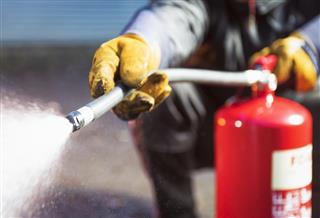 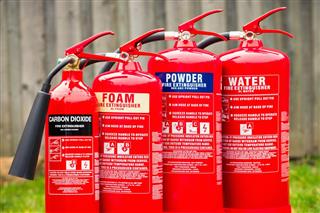