Absence of the commonly found antigens on red blood cells gives rise to rare blood types like AB-, Oh, U- and En(a-); whereas the presence of certain extremely rare antigens results in the blood types like A3 and A3B. The following article throws light on such uncommon blood types. 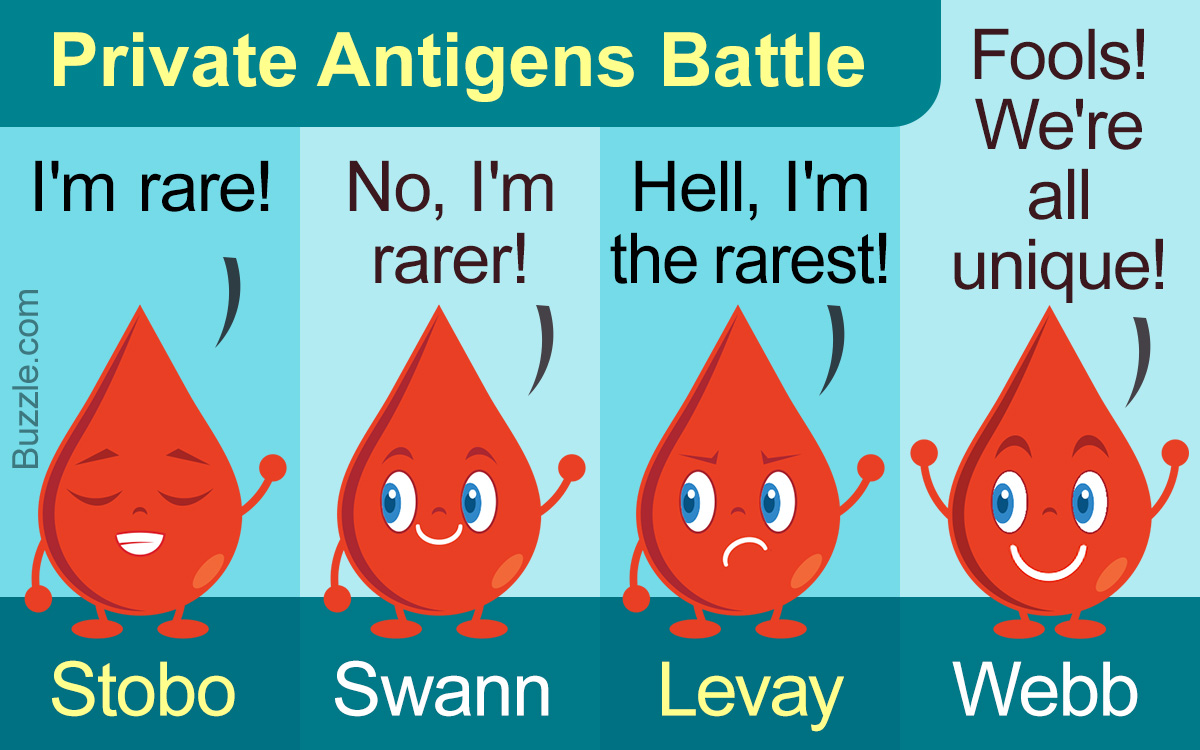 Absence of the commonly found antigens on red blood cells gives rise to rare blood types like AB-, Oh, U- and En(a-); whereas the presence of certain extremely rare antigens results in the blood types like A3 and A3B. The following article throws light on such uncommon blood types.

Individuals with the rare blood types of U-, En(a-) and MkMk are known to have natural resistance to malaria.

The first blood transfusion on humans was performed in the 1600s, with animal blood, and the result was disastrous. In the 1800s, James Blundell proposed the concept of using human blood for transfusion. However, it was only in the early 1900s, that the A and B antigens present on the surface of red blood cells (RBCs) were identified by Karl Landsteiner. This gave birth to the ABO system for identifying blood types, and initiated a series of studies regarding other antigens present on RBCs.

As of today, more than 30 blood type systems have been identified including ABO, Rhesus, MNS, Kell, Lewis, etc.

Before looking at some rare blood types, let us understand the basics about blood groups. The surface of an RBC is covered with numerable different types of macromolecules (proteins, carbohydrates, glycoproteins or glycolipids). These are termed as antigens, and the presence or absence of these antigens determines the blood group of an individual.

Blood type being an inheritable trait, the rarity or commonness of a particular antigen varies for different races and ethnic backgrounds. Certain blood groups are more common in the African population but may be rare amongst Americans. However, there also exist certain extremely rare blood types arising due to genetic mutations, with single cases or individuals belonging to a specific family. Rare blood groups under the common blood group systems have been listed below.

These systems of blood typing depend on a set of carbohydrate antigens called A, B and O antigens as well as the rhesus factor or D antigen. The O antigen is made up of a distinct set of monosaccharide units, and forms a common substructure. The A and B antigens have two different monosaccharide units attached to this common O oligosaccharide. This gives rise to O, A, B and AB groups, which are further classified into two types each, depending on the presence of Rh factor. Of these AB- phenotype has been observed to be present with the lowest frequency.

The frequencies of these blood groups as observed in the American population have been given below.

Subgroups A2 and A3

The occurrence of A2 subgroup is rare in the Asian population and hence A2 and A2B blood groups are the rare blood types amongst Asians. The African and Caucasian populations also show a lower frequency of the blood group A2B.

A3 and A3B blood groups are even rare and have a collective frequency of 0.027% in the Caucasian population, 0.096% amongst Africans and about 0.0012% in the Indian population.

First discovered in Bombay (now Mumbai), this blood group is also known as the h/h or Oh blood group. This rare blood type is the result of a genetic mutation that leads to the deficiency of H antigen, which serves as a precursor for the O antigen. Hence, this blood type is characterized by the absence of O, A and B antigens, and is observed in:

In addition, individuals with a weak expression of the H antigens have also been observed. This blood type is termed ‘para-Bombay blood type’

This system classifies blood on the basis of M, N, S, s, U and Ena antigens that are present on the RBC surface, and attached to specialized molecules called glycophorin A and B. The combination of these antigens gives rise to several blood types.

Glycophorin molecules serve as receptors through which the malarial parasites invade and enter RBCS. In rare cases, a complete lack of the glycophorin molecules (either one or both) occurs in a few individuals giving rise to three rare blood types. The RBCs present in such individuals are naturally resistant to destruction by malarial parasites. These rare blood types are:

➞ En(a-) blood group: Characterized by the absence of glycophorin A, and hence the M, N and Ena antigens. It has been observed in a few individuals in England, Finland and Canada.
➞ U- blood type: Characterized by the absence of glycophorin B, and hence the S, s and U antigens. It is found amongst a set of dark skinned people of African descent.
➞ MkMk blood group: Lacks both glycophorin A and B, and is the rarest type of blood group in this category. It has been reported in a few families in Japan.

In certain cases, some extremely rare antigens have been observed that are present only in a single individual or family. These antigens have not been noted earlier, and hence are not present under any blood type system. Such antigens are termed as private antigens, and are mostly named according to the family of origin.

A few examples include:

Rare blood group is a concern when blood transfusion is to be done on a regular basis, for example in patients with thalassemia, leukemia and other blood-related diseases, as well as certain emergencies like accidents, surgical complications, etc. People with such rare blood groups are encouraged to indulge in regular blood donation so as to ensure timely help for a needy individual. After all,

The rarest blood type is the type that’s not available when YOU need it!
~ Blood Center, Stanford School of Medicine.