Eyes are perhaps the most beautiful part of your body, and they come in many attractive shades, varying from the darkest of browns to the lightest of blues. However, there do exist some rare eye colors that occur in some chosen people. 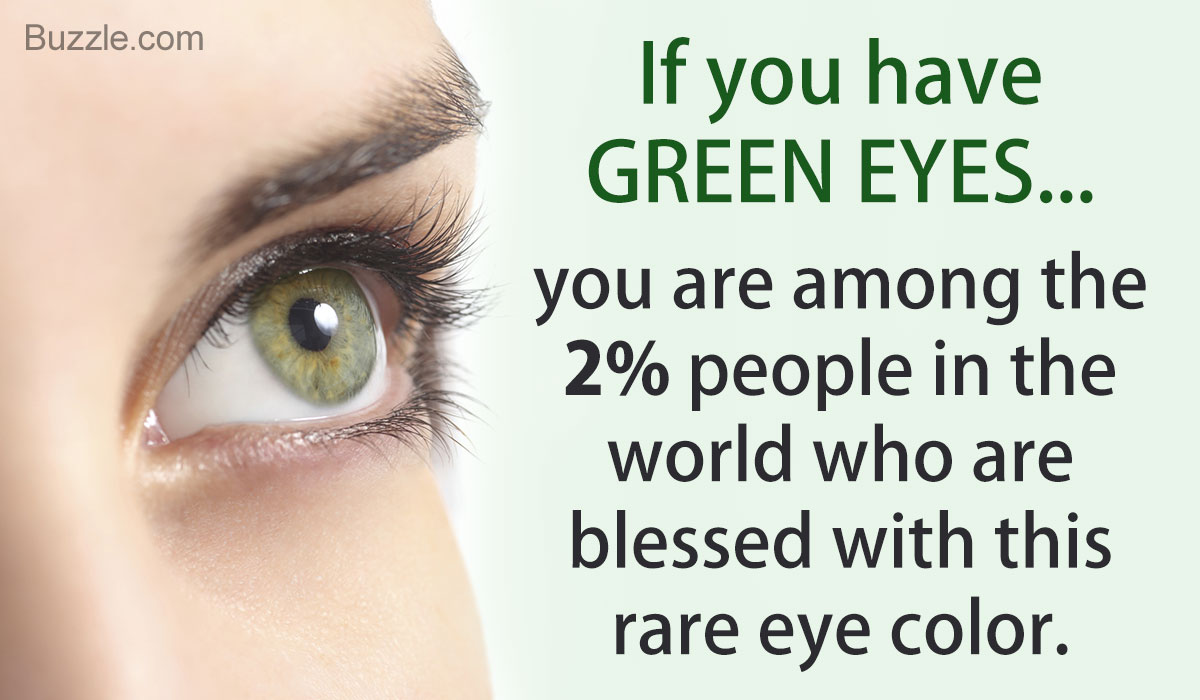 Eyes are perhaps the most beautiful part of your body, and they come in many attractive shades, varying from the darkest of browns to the lightest of blues. However, there do exist some rare eye colors that occur in some chosen people.

According to a study published in Human Genetics in 2008 by Eiberg and colleagues, it is suggested that all those who have blue eyes have a single common ancestor. This ancestor lived around 6,000 to 10,000 years ago, and a genetic mutation brought about a difference in eye color in humans, which was once confined to only brown.

Yes, it is suggested that at one point, all humans on earth had brown eyes. It was later due to genetic mutations that varied eye colors came to evolve in humans. It is believed that the color of your eye is influenced by as many as 16 different genes. Mainly, there are two factors that determine the eye color of a person: (i) the pigmentation level of the iris; and (ii) the scattering of light in the stroma of the iris. Dark-colored eyes have a higher concentration of melanin, whereas light-colored eyes have quite lesser amount of melanin present in their stroma. Brown is considered to be the most common eye color followed by the colors blue and gray.

Surprised that blue is not among the rarest eye colors? Guess it isn’t that hard to find a blue-eyed child after all! It would also be interesting for you to know that irrespective of the eye color appearing to be blue, there is no blue pigmentation present inside the eye; in fact, this color is a result of the presence of brownish-black pigmentation of the epithelium of the iris and the low levels of melanin in the stroma, which is present in front of the epithelium. Therefore, the shorter wavelengths tend to reflect the stroma, resulting in Rayleigh scattering, making the eyes appear blue in color. The same is the case with green eyes, about which we will explain in the following section that contains a list of the rare and unique eye colors.

The first thing that we tend to notice in another human is the eyes. Eyes are the primary features that attract an individual, and if the person is blessed with a rare eye color, you will never ever forget that person, would you? As mentioned earlier, eye colors vary from the darkest shades of brown to the lightest tints of blue. But, there are other colors that exist rarely. These are listed as under. 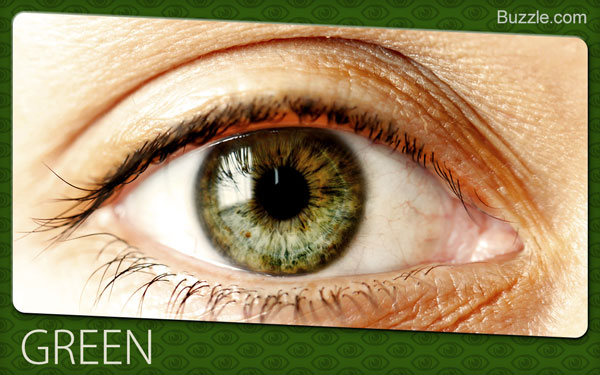 Green eyes are considered to be extremely alluring; perhaps that is one reason most stars in Hollywood are proud owners of this eye color. Like blue eyes, the appearance of this color is also a result of the Rayleigh scattering of the light that reflects from the yellow-colored stroma. A study that observed the Icelandic and Dutch adults found that green eyes were more prevalent in females in comparison to males. This makes the charming heartthrob Channing Tatum all the more eyeful!

According to the website, Eye Doctor Guide, those who have green eyes are usually born with blue or gray eyes. As the baby grows, the melanocytes produce melanin in the iris, changing the appearance to green. This eye color was first traced back to the Bronze Age, among those who resided in south Siberia. Today, green eyes are most commonly found in Central and Northern Europe. Other areas including West, Central, and South Asia, and some regions of Southern Europe also have people with this eye color. For the European Americans with green eyes, it is said that they usually have Germanic and Celtic ancestry. 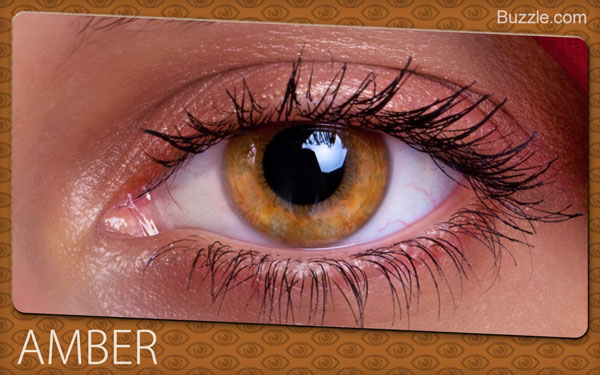 Amber eyes are often confused with hazel eyes and vice versa; however, there is quite a difference between the two. To begin with, amber eyes are rare! While hazel eyes seem as if the color shifts from brown to green, amber eyes have one solid color, which appears like a shade of yellowish brown/golden with a coppery/russet tint. The pigment responsible for this color is lipochrome―the yellow color which is also present in green eyes.

A very high concentration of lipochrome clubbed with a low concentration of melanin results in the beautiful shade that is rarely found. This eye color is very rare all across the globe and is mainly found in residents of regions including Asia and South America. These eyes are also known as Wolf Eyes as this eye color is also shared by wolves. Although there are other animals with this eye color such as owls and pigeons, wolf eyes is the name given to these mysterious eyes; we totally understand why! After all, wolves seem to be more mysterious and catchy than pigeons and owls, right? 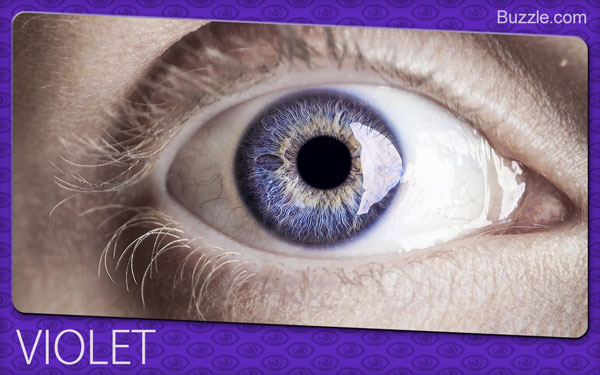 Yes, violet eyes do exist in reality! Who can forget the enigmatic violet eyes of the renowned actress Elizabeth Taylor? She had what we can call the rarest composition of melanin and pigmentation, which gave her this unique eye color. There are a lot of interesting beliefs/myths associated with this eye color. Scientifically, it is believed that deep blue eyes may at times seem to be violet and that ‘real’ violet eyes can only occur in case of albinism.

Yet another, somehow mythological, belief associates this eye color with a genetic mutation known as Alexandria’s Genesis. It is said that people with this mutation tend to have pale skin and violet eyes. It is also said that these people are immune from various illnesses, and tend to have long and youthful life. Yes, apparently their skin is impervious to aging, burn, and tan. They also tend to have a perfect vision throughout their lifespan. While this is not seen in reality―we mean Liz Taylor did age, didn’t she?―this rumor originated in ancient Egypt where a mysterious light was seen, and all those who witnessed it ended up having purple eyes. No matter what legends say, if you have these gorgeous set of eyes, you are truly rare! 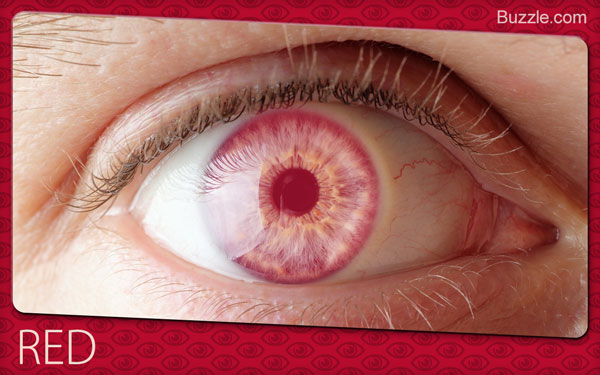 Red- or pink-colored irises are associated with severe cases of albinism. Because those with this condition lack pigments in their body, their eyes tend to appear red under certain lighting conditions, and because of the extremely low level of melanin present in their stroma. Alternately, some sources also state that red eyes may be rarely present in certain people without albinism due to a slight leakage of blood into the iris, giving the eye color a reddish appearance.

We all have seen our eyes appearing as red while clicking pictures. Ever wondered why that happens? Well, the “red-eye effect” occurs when the extremely bright light emitting from a flash reflects off the retina. The retina consists of many blood vessels, and when exposed to the flash, it makes the pupil appear red in the photograph. 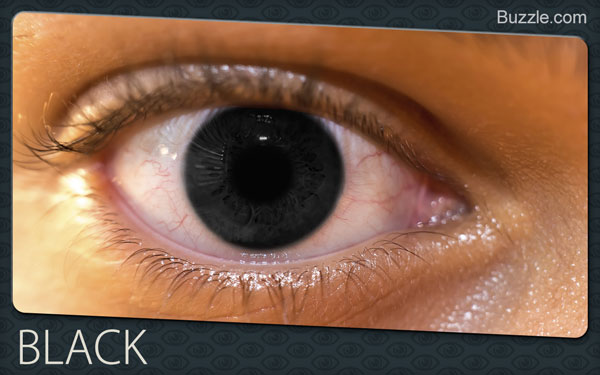 Dark brown eyes usually appear to be black if seen normally, from a distance. However, when exposed to light, it is possible to see the brownish tinge inside the iris. But can the eye color actually be black? There is a lot of dispute when it comes to the actual existence of pure black eyes. When we searched the always-handy source for info―the Internet, we came across this paranormal belief associated with black eyes; either they don’t exist, or they are demonic.

If you have black eyes, by which we mean just the iris with a perfectly normal white sclera, then you are among the rare few people who can testify towards the actual existence of jet black eyes. Most people take the black appearance as the dark brown color. Alternately, some believe that the whole ‘dark brown’ association has forced people to widely believe that black eyes don’t exist while they actually do, although very rarely. The website Socialphy states that the book ‘Evolution of the Eye’ testifies the fact that pure black eye color does exist in reality. 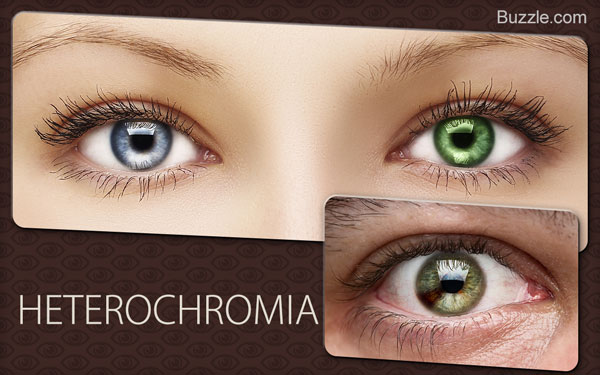 The causal factors that are linked with this condition vary from being genetic to traumatic in nature. It can also occur due to a disease that ends up causing an excess or deficiency of pigment within one iris completely or partially. This condition is quite uncommon, which makes this dual color combination a rather rare occurrence. It would be interesting for you to know that actor Lee Van Cleef was also born with this condition, with one eye being blue and the other being green. He would wear brown contact lenses to hide this difference.

Our eyes are the light that show us the world, and it is the light of this world that affects the color of these very eyes. It is amazing to observe the way our eye color alters from infancy to adulthood. Any color can give you the variation in shades depending upon the amount of light exposed to your eyes. Although each and every eye color has its own charm and beauty, which is distinctive of any other, it is natural to be intrigued by what is termed to be ‘rare’. Are you an owner of a rare eye color? Feel free to share your experience and feelings with us through the comments section below.