The Science Behind Hangovers

Partied hard all night? Drank till you dropped? Even as your vision dims and your mind blacks out, you are subconsciously aware of the tremendous hangover that you are going to wake up to the next morning. What is it about alcohol that gives you hangovers? What are its biological mechanisms? Read ahead to find out.

Home / Uncategorized / The Science Behind Hangovers

Partied hard all night? Drank till you dropped? Even as your vision dims and your mind blacks out, you are subconsciously aware of the tremendous hangover that you are going to wake up to the next morning. What is it about alcohol that gives you hangovers? What are its biological mechanisms? Read ahead to find out.

A hangover is the wrath of grapes. ~ Dorothy Parker

Fair enough – after days of crushing, processing, fermenting, distilling, brewing and being locked up to age for months (sometimes years), it shouldn’t come as a surprise that those grapes harbor a significant amount of grudge towards mankind! Their life-essence lies in wait, saturated with bottled-up (pun intended) resentment. All this wrath gets a much awaited release as soon as an unwitting specimen of humanity makes the mistake of tipping the bottle and taking in more than he can handle! The result? You know it, don’t you! You wouldn’t have come here if you hadn’t experienced it sometime! Now, while we all know what leads to those terrible hangovers, not many of us are aware of the exact biochemical mechanisms that take place inside our bodies and manifest as the external physiological symptoms. A lot of people will tell you that hangover is all about dehydration but that’s not all there is to it. Therefore, let’s proceed towards the subsequent paragraphs to take a detailed look at the science behind hangovers.

A Close Look at the Inner Workings of a Typical Hangover

A hangover is the sum of a set of biochemical effects that are triggered inside the body when alcohol is consumed. All these effects take place in different physiological areas of the body and, hence, a hangover is not just restricted to the head. That headache is a manifestation of collective biological reactions to alcohol. Let’s take an area-by-area tour of the geography of a typical hangover.

An anti-diuretic hormone, vasopressin is responsible for sending chemical signals to the kidneys to not send all the water to the bladders for expulsion and retain some of it for the body to reabsorb. This process is extremely important for saving the body from dehydration. Vasopressin plays an important role in regulating the levels of water, glucose and salts in the bloodstream. Now, when alcohol hits the bloodstream, its molecules are carried all over the body including the pituitary gland (where the preprohormone or precursor of vasopressin is produced) and the hypothalamus (where this preprohormone is synthesized). Alcohol inhibits the production of the precursor of vasopressin in the pituitary gland and this leads to a diuretic effect as the kidneys no longer receive chemical signals for water reabsorption. All the water from liquid materials that enter the body get carried over to the bladders wherefrom they are evacuated. This lowers the level of water in the body, making way for dehydration. Remember the number of trips you took to the restroom the last time you emptied two bottles of beer? Well, the reason was nothing but the suppression of vasopressin which caused more water to fill your bladder than usual. The resultant dehydration is what causes those nagging headaches, signaling that your body needs to replenish the excessive loss of fluids. This is the reason why it is recommended that you drink lots of water before and in-between drinks.

During the fermentation process of wines and liquors, certain chemical compounds, known as congeners, are produced which are believed to impart distinct aromas to distilled liquors and signature tastes to non-distilled alcoholic beverages. Common alcoholic congeners are aldehydes, acetaldehyde, acetone, fusel alcohols, ester alcohols, etc. Certain toxic congeners, such as acetaldehyde, are produced in the body itself when the liver metabolizes alcohol with the help of an enzyme, alcohol dehydrogenase. Acetaldehyde is further broken down by two other enzymes, acetaldehyde dehydrogenase and glutathione, to form harmless compounds. However, during binge-drinking sessions, the rate at which alcohol and toxic congeners are broken down into nontoxic compounds is slower than the rate of alcohol intake. Glutathione, especially, takes a lot of time to get replenished and in case of heavy drinking, a lot of alcohol and acetaldehyde get to stay in the body in their toxic forms for a long time before getting broken down. Owing to the presence of such toxins in the body and the liver’s inability to metabolize them at a decent pace, it is common for hangover symptoms such as nausea and vomiting to accompany headache. This is nothing but the body’s attempt to expel the excess alcohol and toxins.

Despite acting as a stimulant in the initial stages of consumption, alcohol is a central nervous system depressant. It acts as a depressant by blocking the production of glutamine. Glutamine is an amino acid that goes on to act as a natural stimulatory neurotransmitter. Therefore, as long as one keeps consuming alcohol, the glutamine levels stay lower than normal, leading to the typical depressive symptoms of dizziness, loss of balance and muscle coordination, drowsiness, slurred speech, decreased mental alertness, blurred vision, etc. Now, as soon as one stops drinking and the process of alcohol metabolism takes over, the body attempts to cover the glutamine deficit by producing it in huge quantities. This causes the mind to go into a state of wakeful-sleepiness – while the body aches to give in to sleep, the mind receives a rush of stimulants and finds it difficult to shut down. Therefore, while senses are not as sharp as they should be when sober, the mind does not surrender to slumber either. This is the reason why binge-drinkers find it difficult to get deep, undisturbed sleep despite feeling drowsy. Now, this lack of deep sleep results in the inexplicable fatigue that is felt the next morning. While your body felt tired and slack, your mind just couldn’t go off awake-mode. That’s how you end up feeling zombified the morning after a night of partying hard!

The sum of effects of vasopressin inhibition + toxic congeners + glutamine rebound is what causes hangovers. Unpleasant aftereffects of drinking can be avoided by following various remedial measures such as drinking lots of water before and in-between drinks, not drinking on an empty stomach, eating lots of fresh juices in the morning, eating a nutritious breakfast, etc.

This way, you would not have to give up on indulging in your favorite poison. Some basic knowledge and a little common sense can go a long way in making that night out with friends a thoroughly enjoyable experience. 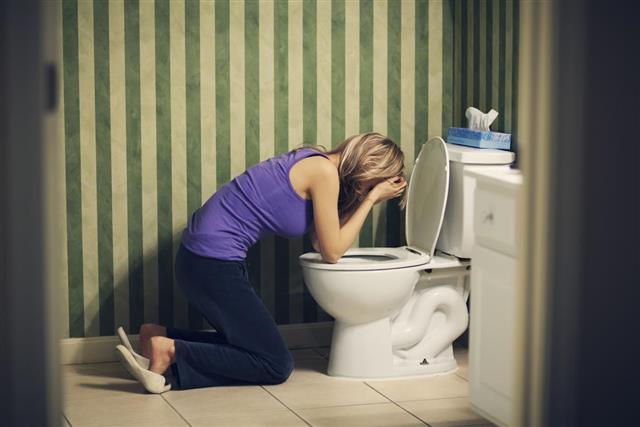