Triglyceride content of blood is an important indicator of heart health, as well as certain hepatic and endocrine disorders. The following article throws light on the normal range for triglyceride levels in blood, as well as the implications of their abnormal levels. 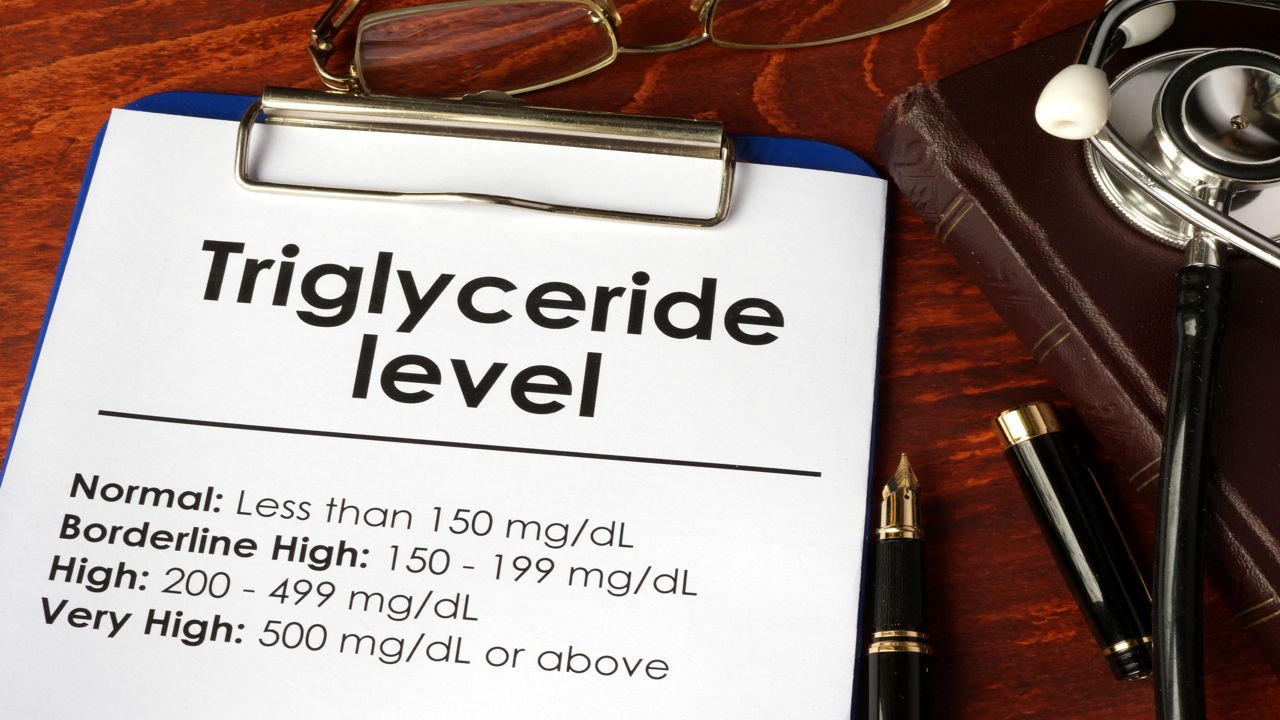 Triglyceride content of blood is an important indicator of heart health, as well as certain hepatic and endocrine disorders. The following article throws light on the normal range for triglyceride levels in blood, as well as the implications of their abnormal levels.

The triglyceride content of blood is lower in winter than in summer.

Triglyceride is a type of fat molecule obtained when a glycerol molecule is esterified with three fatty acids. Body cells breakdown this molecule to obtain energy and fuel various cellular processes. In fact, their energy yield per gram is twice as much as that of carbohydrates.

Triglycerides being water-insoluble, they are transported through blood in the form of lipoproteins, mainly very low density lipoproteins (VLDL) and chylomicrons. Given below is a brief account of the fasting triglyceride levels in blood, for children and adults, as well as the disorders and risks indicated by abnormal levels.

Triglyceride levels of blood tend to be much higher after the consumption of food. Hence it is advised to avoid eating for 8-12 hours before the blood sample is drawn for a lipid profile test. Given below is the normal range of fasting triglyceride levels, in children and adults, as per the National Cholesterol Education Program (NCEP), USA.

Note: The reference/normal range for serum triglycerides may vary for different diagnostic laboratories and countries.

However, new techniques enable postprandial measurements, and recent studies are demonstrating the usefulness of such postprandial levels in assessing the risk of cardiovascular diseases. For almost the entire day, the amounts of triglycerides circulating in blood are influenced by meal intake. Hence, the actual levels of triglycerides present in blood daily will be more accurately represented by post-meal measurements. Moreover, atherosclerosis and other cardiovascular diseases are linked to the postprandial effects taking place in the body.

Such investigation is important to understand the variability in levels of triglycerides after food intake, and the precise metabolic events that follow. With this knowledge in hand, a more appropriate treatment option can be decided in order to lower triglyceride content of blood. Nevertheless, a standard reference range for post-meal triglyceride levels has not been determined and may vary with each individual case.

Pregnancy is characterized by complex changes in lipid metabolism so as to fulfill the constant energy requirements of the fetus. The fat stores of the body are utilized for this purpose, and hence there is an increase in the amounts of triglycerides and lipoproteins in blood.

In the first trimester, triglyceride levels fall, and then gradually increase to reach a maximum value during the third trimester. The levels observed during third trimester are 2-3 fold higher than the regular levels. After delivery, the amount of triglycerides gradually reduces to attain the regular levels. The time required for this decline is highly variable (8-14 weeks postpartum) with lactation being the most influential factor.

Elevation of triglyceride levels in blood is termed hypertriglyceridemia, and is considered to be a huge risk factor for cardiac ailments as well as certain systemic diseases.

► Causes
High triglyceride levels can be attributed to the following conditions or diseases.

► Effects
Increased amount of triglycerides in blood leads to atherosclerosis, a condition characterized by the deposition of small fatty plaques on the inner surface of blood vessels. As a result, the walls of the blood vessel harden, and the lumen becomes narrow. This leads to ischemic (decreased blood supply) and hypoxic (decreased oxygen supply) conditions in the body. Such ischemia may lead to cardiac arrest and coronary heart disease (CHD).

A triglyceride level higher than 1000 mg/dl has been identified as one of the important etiological factors in acute pancreatitis. However, the precise mechanism through which such high content leads to inflammation of pancreas is not fully understood. Current studies reveal that alteration in the functions of pancreatic lipase leading to cellular injury, as well as hampered blood flow to the pancreas cause pancreatic inflammation. This condition is manifested through symptoms like recurrent pain in the upper abdomen, abdominal tenderness, nausea, vomiting and reduced appetite.

► Treatment Options
The precise treatment depends on the underlying disorder. However, triglyceride levels can be lowered with the help of some simple measures like constructive dietary and lifestyle changes, as well as certain medications. These have been listed below:

» Dietary changes: The obvious modification is reducing the fat intake per meal by avoiding deep-fried foods, desserts, junk foods, red meat, and opting for fresh vegetables and fruits, low-fat products, lean meat, etc. The intake of carbohydrates must be low to moderate. It is essential avoid processed and refined foods as well as artificial sweeteners. In addition, increasing the consumption of mackerel, sardines, herring, and other fish high in omega-3 fatty acids is a wise option.

» Exercise: A regular and moderate exercise regimen aids the breakdown of fats, and helps to lower and maintain the triglyceride levels. This along with dietary changes will help to maintain a healthy weight and avoid the progression of weight-associated conditions.

Although it is an established fact that low triglyceride levels indicate good health, levels below 10 mg/dl are indicative of certain disorders that affect lipid metabolism.

► Causes
The occurrence of such low triglyceride levels is highly uncommon, and is seen as a result of following:

► Effects
Just as high triglyceride content of blood affects cardiac functioning, abnormally low amounts may also lead to weakening of cardiac muscles due to lowered energy supply. This increases the risk for cardiac arrest and heart attacks. In addition, it also leads to severe vitamin deficiency, especially that of fat-soluble vitamins.

► Treatment Options
The treatment advised in order to increase the triglyceride levels depends on the etiology. In case of malnutrition, a wholesome diet and dietary supplements are prescribed. Since low triglyceride levels often lead to a deficiency of fat-soluble vitamins (especially vitamin E), vitamin supplements are always prescribed along with the condition-specific medications. In case of fat malabsorption and genetic disorders like abetalipoproteinemia, it is advised to avoid the intake of triglycerides since they cannot be absorbed and used up by the body.

Triglyceride levels help to assess dietary habits and lifestyle as well as identify life-style associated diseases. Levels significantly above 100-150 mg/dl are indicative of abnormal lipid metabolism. A combination of balanced and healthy diet coupled with regular exercise is the key to maintain normal triglyceride and cholesterol levels, as well as keep cardiac problems at bay.

Disclaimer: This article is for informative purposes only, and should not be used as a substitute for professional medical advice.