It is the mother, who is the first one to know about her pregnancy and the new life that is growing inside her. Pregnancy size determines a baby's growth inside the mother's womb with each passing day. Here is some information on the week-by-week manifestation of the baby, in the fetus.

It is the mother, who is the first one to know about her pregnancy and the new life that is growing inside her. Pregnancy size determines a baby's growth inside the mother's womb with each passing day. Here is some information on the week-by-week manifestation of the baby, in the fetus.

Pregnancy size can be divided into 40 weeks, i.e. it adds up to 3 trimesters. During the nineteenth century, pregnant women were restricted to gain weight, because it was assumed that the more the mother weighs, more difficult the labor will be. Doctors encouraged them to limit their food intake so that they gain 15lbs to 25lbs at the most.

As a result, many women had to follow strict dietary guidelines. However, all that changed around 1970, when studies showed that restricted diets led to dangerously low-birth weights. The National Academy of Sciences Committee on Maternal Nutrition helped in lifting the policy. From 15lbs, the recommended weight gain went up to 20 to 24lbs. 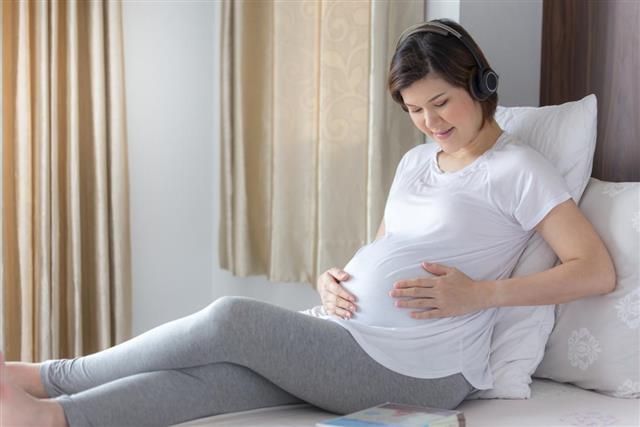 Here is a look at some of the important developments of the baby during the period.

The first two weeks, during the first trimester, includes the period when one had their last menses till the beginning of pregnancy. It may also include the time when the sperm fertilizes the eggs. Slowly, the fertilized egg is transformed into an embryo.

About this time, you may also feel early pregnancy symptoms like nausea. The major organs of the baby start to develop in the fifth week. In fact, this week is crucial, since the embryo develops into what we call the baby’s body.

Week 6 and 7 sees that the baby’s little heart beats for the first time and his size also doubles. You can determine the baby’s sex during week 9 and by week 10, the embryo turns into a small baby. You would also notice another change during week 14, the enlarging and darkening of the area around the nipples.

You have entered the second trimester, so it is time to celebrate. The initial bouts of nausea that you used to experience should come to an end now. The second trimester usually extends from week 15 to week 26. The baby now slowly starts to move its head, lips, and feet, and also frequent urination symptoms should diminish by now.

Myelinization, which is the development of a myelin sheath around a nerve fiber, helps in increasing the body reflexes of the baby in a much quicker way.

It begins to sleep and wake up on a regular basis around week 20 and by the time the baby enters the 24th week, its heartbeat becomes so audible that it can be heard by placing an ear on the stomach. Its brainwave activity also starts from eyes to ears, by the end of the second trimester.

The third trimester begins from week 27. It extends till the birth of the baby i.e. week 40. Apart from the increased movements of the baby, your breasts will start producing plenty of colostrum.

So, it is important to keep up with your regular doses of prenatal vitamins. This will also help to safeguard the mother from anemia in pregnancy at bay. Your baby’s sight, sound hearing capability, and smelling capability will also develop during this time.

During the last part of your pregnancy, you should be vigilant because signs of labor may start showing during this time. Your due date may be around any time, two weeks before week 40 or two weeks after the same.

During all these three trimesters, you may have some questions in mind related to the pregnancy bump size, what the abdomen size should be, and does the cervix size alter. If your bump size is too big, it may indicate that there is a lot of amniotic fluid. It often occurs if the mother is having diabetes or if she is carrying identical twins.

Again if the bump size is too small it can indicate lack of fluid which means that the baby is not growing at a normal rate or the mother may have kidney diseases. So, your belly size during pregnancy is one of the most important factors in determining the healthy growth of you baby.

As for the cervix size, it increases during the course of gestation. Later the wall becomes thicker, since there is an increase in the compliance of the tissues.

Eat healthy during pregnancy and don’t be under any misconceptions that any food is good for you and your baby. There is a thin line of difference between good food and food good for your health. Visit your doctor regularly. It is now time to prepare for your baby’s arrival.

Disclaimer: This is for informative purposes only, and should not be used as a replacement for expert medical advice.